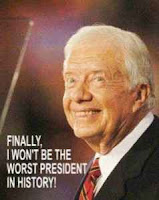 Obama talks a good line about the environment. But, it's all talk and no change. He claimed that his Administration is funding energy research and development. Don't believe it. If you go to the Energy Dept website, you'll find a page which tells you that no new projects after 2008 have yet to be funded. So much for the Obama lie.

Obama's real plan is to transfer wealth from the middle class to the lower class via an energy tax. He dresses it up in flowery language, but when you think about it, he simply thinks of himself as the Robin Hood of the 21 Century, taking from those who have money and giving it to the poor.