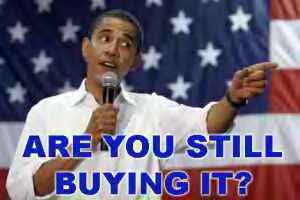 American officials agreed to send the two terrorists from Guantanamo to Saudi Arabia where they entered into an "art therapy rehabilitation program" and were set free, according to U.S. and Saudi officials.

An "art therapy rehabilitation program." Yes, you read that right.

Guantanamo prisoner #333, Muhamad Attik al-Harbi, and prisoner #372, Said Ali Shari, were sent to Saudi Arabia on Nov. 9, 2007, according to the Defense Department log of detainees who were released from American custody. Al-Harbi has since changed his name to Muhamad al-Awfi.

Both Saudi nationals have since emerged in leadership roles in Yemen, according to U.S. officials and the men's own statements on al Qaeda propaganda tapes. 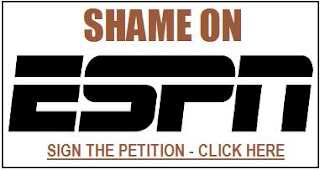 Friends, the broadcast was shameful. Throughout the entire game the announcers, ESPN crew and college officials were focused on trying to shove down the viewers throats the hoax of climate change, featuring propaganda footage and biased commentary from the sports announcers declaring the need for Americans to reduce carbon emissions or risk devastation to the environment.

We need to speak out and have the voice of consumers who don't buy into this junk science to be heard. We have obtained the email addresses of 3 of ESPN's highest ranking executives. We need you to contact them ASAP and register your protest for their shameful climate-change propaganda:

The broadcast took place the week that the Copenhagen Climate Summit is taking place - yet another propaganda-driven effort to impose socialistic government regulations and government-control on the economy (and on the actions of individuals) and using the hysteria of climate devastation as the means to advance their propaganda.
Posted by Konall at 22:15 No comments: 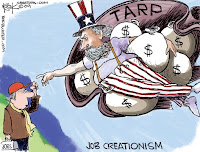 The White House arbitrarily cut the projected long-term cost of the Troubled Asset Relief Program (TARP) by $200 billion, but rather than leave that money unspent, the administration wants to use it for a jobs bill. "TARP has turned out to be much cheaper than we had expected, although not cheap," Obama said. "It means that some of that money can be devoted to deficit reduction. And the question is: Are there selective approaches that are consistent with the original goals of TARP -- for example, making sure that small businesses are still getting lending -- that would be appropriate in accelerating job growth?" Rep. Barney Frank (D-Fannie Mae), on the other hand, wants TARP cash for more mortgage aid. Either proposal would likely require legislation changing the purpose of TARP.

In rebuttal, Rep. Tom Price (R-GA) argued, "TARP is not the Democrats' personal bank account and was never intended to be a $700 billion perpetual slush fund. This is a perfect example of the hazards of taxpayer-funded bailouts." Actually, Democrats had that in mind all along.

Meanwhile, Hillary Clinton still owed $6 million to her pollster Mark Penn after her 2008 presidential fizzled out. Fortunately for Clinton and Penn, there was the Recovery Act. According to The Hill, "Federal records show that a contract worth $5.97 million, part of the $787 billion stimulus Congress passed this year, helped preserve three jobs at Burson-Marsteller, the global public-relations and communications firm headed by Penn." Naturally, Penn's firm denied the report, calling it "fundamentally inaccurate."

Labels: an appeal to Heaven, don't give up the ship, GADSDEN