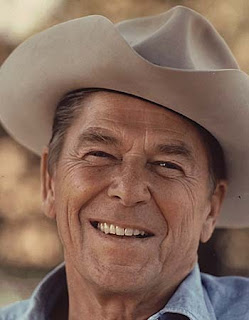 ``It's time we asked ourselves if we still know the freedoms intended
for us by the Founding Fathers. James Madison said, `We base all

our experiments on the capacity of mankind for self-government.'
This idea that government was beholden to the people, that it had
no other source of power, is still the newest, most unique idea in all
the long history of man's relation to man. This is the issue of this
election: Whether we believe in our capacity for self-government or
whether we abandon the American Revolution and confess that a
little intellectual elite in a far-distant capital can plan our lives for
us better than we can plan them ourselves.'' —Ronald Reagan

``The dustbin of history is littered with remains of those countries
that relied on diplomacy to secure their freedom. We must never
forget... in the final analysis... that it is our military, industrial
and economic strength that offers the best guarantee of peace for
America in times of danger.''—Ronald Reagan
``[A]ll Americans should reflect upon the precious heritage of liberty
under law passed on to us by our Founding Fathers. This heritage
finds its most comprehensive expression in our Constitution. The
framing of the Constitution was an arduous task accomplished in the
spirit of cooperation and with dedication to the ideals of republican
self-government and unalienable God-given human rights that gave
transcendent meaning and inspiration to the American Revolution...
The wisdom and foresight of the architects of the Constitution are
manifest in the fact that it remains a powerful governing tool to
the present day. Indeed, a great British statesman has called it `the
most wonderful work ever struck off at a given time by the brain
and purpose of man.' For 200 years, people from other lands have
come to the United States to participate in the great adventure in
self-government begun in Philadelphia in 1787. It is no surprise that
knowledge of the Constitution is one of the primary requirements
for new citizens... [A]ll citizens should reread and study this great
document and rededicate themselves to the ideals it enshrines.''—
Ronald Reagan
Posted by Konall at 19:16