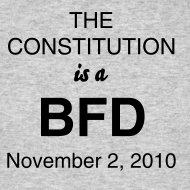 WASHINGTON — The tea party's demands for ideological purity have caught some GOP presidential hopefuls off guard, forcing them to awkwardly defend past decisions as they watch hard-right rivals gain ground.


It's painfully ironic for some of the Republicans most often mentioned as possible challengers to President Barack Obama in 2012. Stances that gave them national attention and credibility are now being used as cudgels to attack them as wobbly centrists.
By CHARLES BABINGTON (AP) – 1 day ago
http://www.google.com/hostednews/ap/article/ALeqM5ismwn0kMbNL0HNLWsGSVcTVqIaywD9EV6J081
Posted by Konall at 22:18